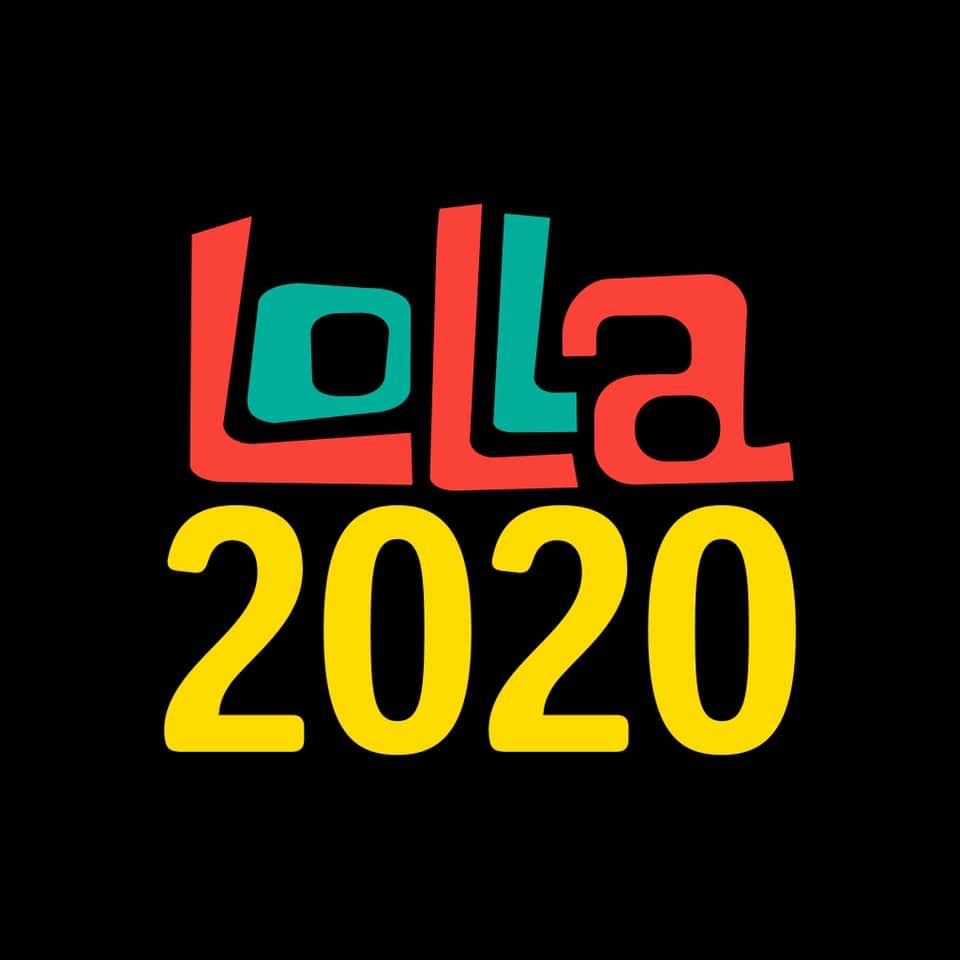 In case you thought that Lollapalooza 2020 wasn’t happening this year…you thought wrong! Though we won’t be dancing (or avoiding the teenagers) in Grant Park this summer, the team at Lollapalooza has put together a weekend of past performances, live-streamed sets, and appearances by artists and Chicago public figures alike.

The 4-day event will feature more than 150 performances, including sets from previous festivals in Chicago and Lollapalooza international editions. The fun doesn’t stop with replays of past performances, though! The virtual festival will also feature original performances from artists like Alison Wonderland (Live Set), H.E.R., Kali Uchis, Kaskade, Louis the Child, Pink Sweat$, Tank and the Bangas, The Neighbourhood, Vic Mensa, ZHU, and more. 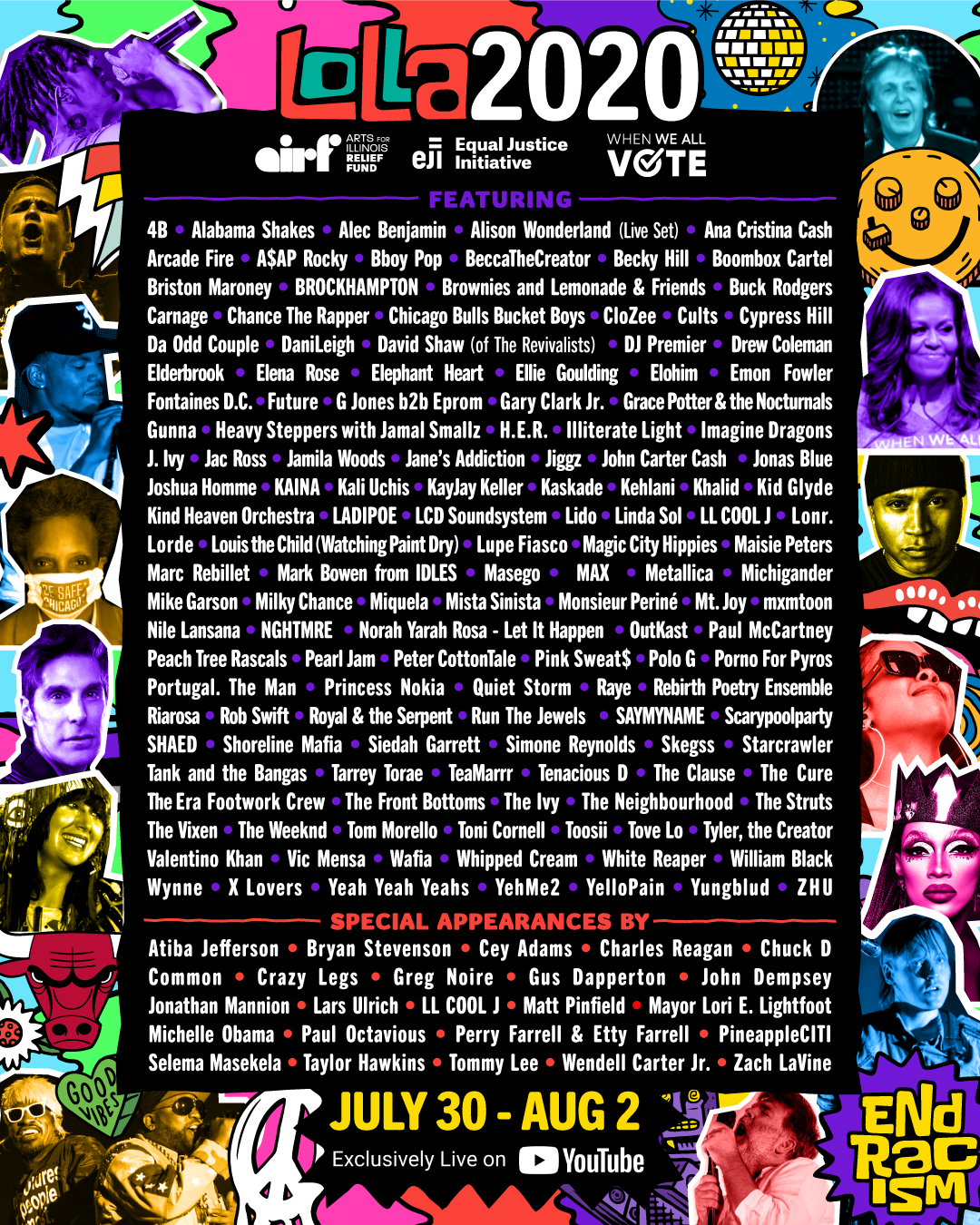 Lollapalooza is partnering with Arts for Illinois Relief Fund, the Equal Justice Initiative, and When We All Vote, Michelle Obama’s non-profit and nonpartisan organization that aims to increase voter participation in elections. You can donate during the festival here.

It’s the year of Chicago Music, and the city won’t let a pandemic interfere with the celebrating! The initiative, now extended into 2021, will be featured at Lolla 2020 with four performances by local artists.

The four-day event kicks off today at 5pm CST, all on Lollapalooza’s YouTube Channel.

Mitch and I have compiled a list of performances we think are worth watching. Anything we missed? 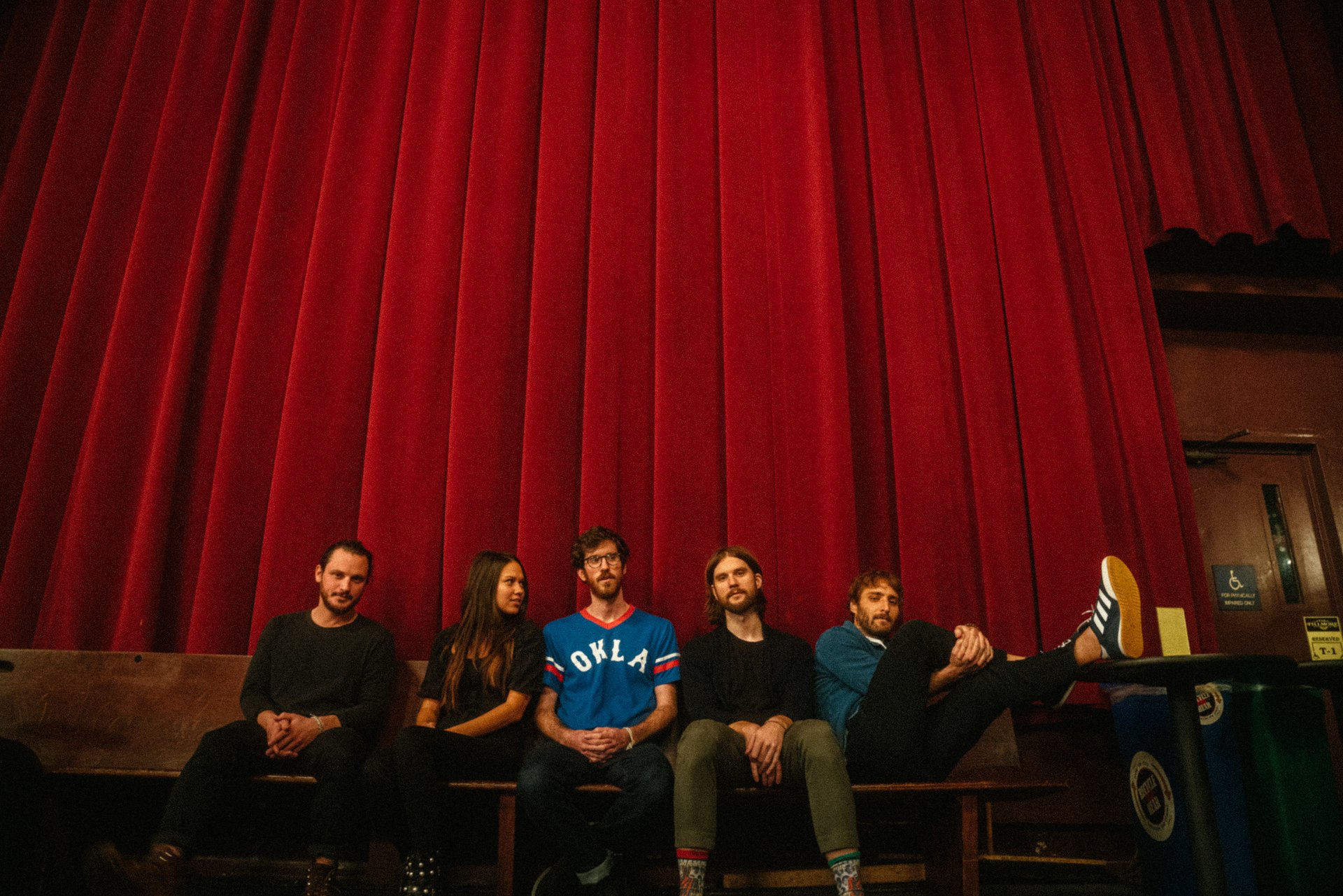 Mt. Joy is not from Chicago, though their fanbase has continued to grow rapidly here. Mt. Joy has toured with artists like The Head and The Heart, Rainbow Kitten Surprise, and The Lumineers, even playing Chicago’s Pritzker Pavillion last summer and New Year’s Eve shows at the Metro. You get it…they have a fan base here. – Kristin

Do I need to tell you why you should watch Paul’s set from 2015? I was there to witness it in the flesh and it was easily one of the best shows I’ve ever experienced. Though the magic probably won’t be easily transmittable through a TV or computer screen, just trust me when I say it’s worth checking out. – Kristin 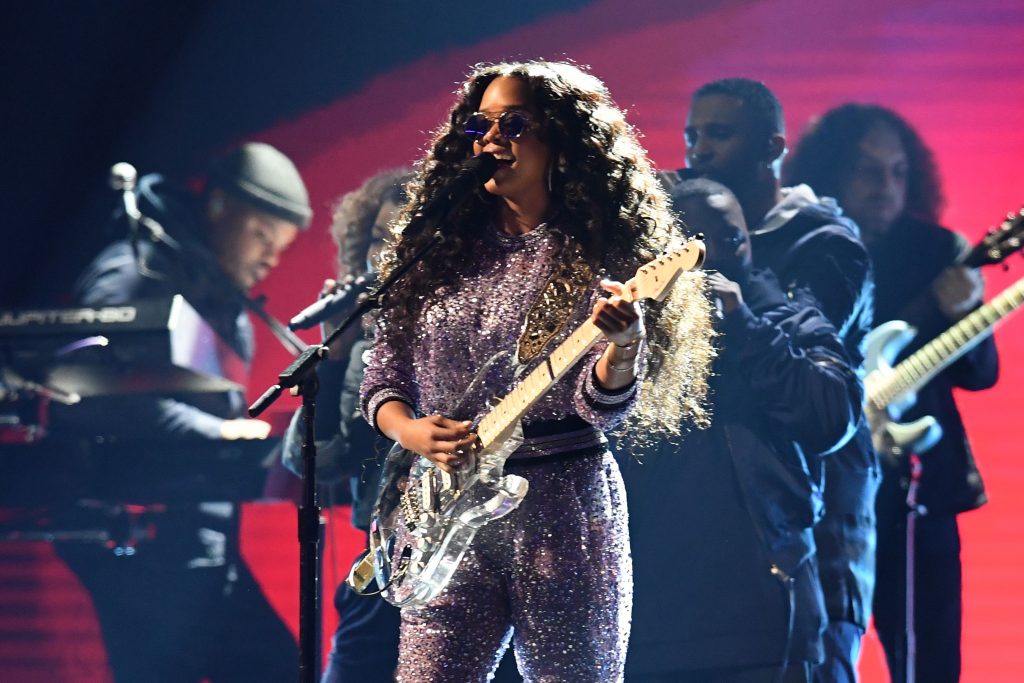 I’ve raved about H.E.R. enough times in the past, so I’ll keep this one short and sweet. IF you’re looking for some relaxing R&B tunes with unparalleled vocals, she’ll be waiting to sweep you away. Fingers crossed that we hear a performance of her recent single, “I Can’t Breathe.” – Kristin 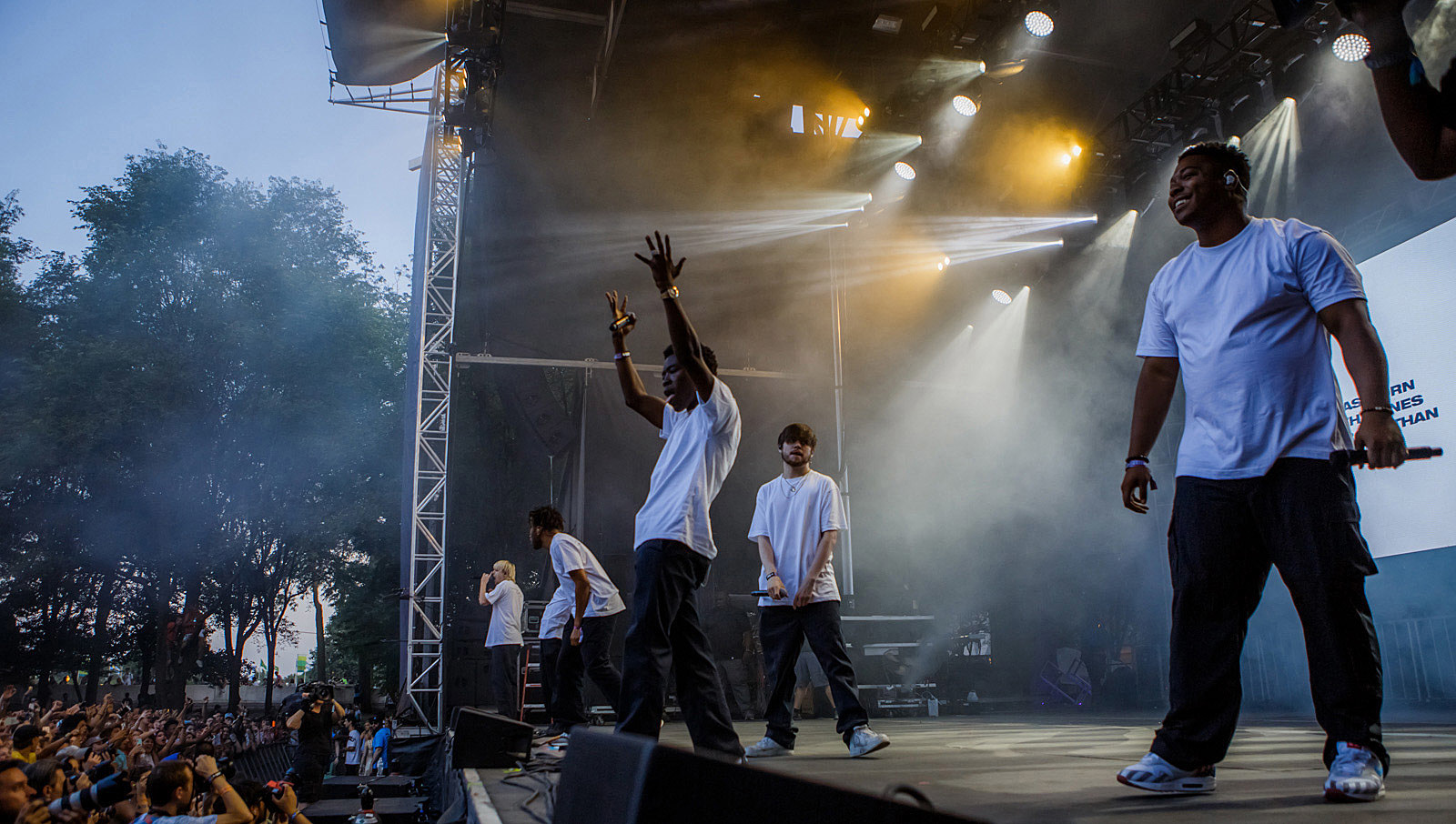 Are there many times in your life that you’ll get to experience a six-member hip-hop group perform on a stage that’s good to fit four comfortably? I’d assume not many times. In 2018, BROCKHAMPTON made their debut at Lollapalooza and of course, were slated to perform on the second smallest stage on the entire festival grounds. – Kristin 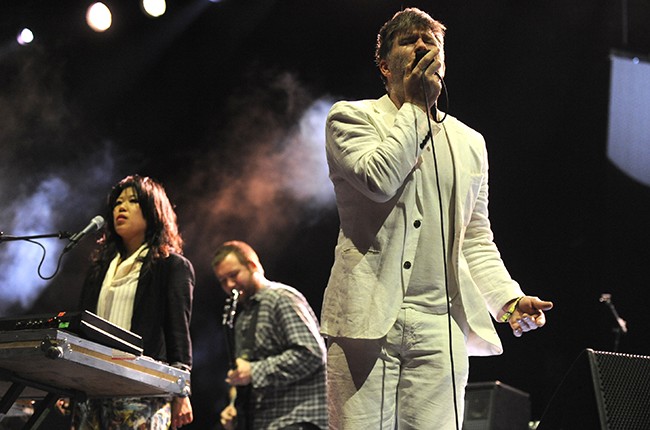 Not to be dramatic, but seeing LCD Soundsystem perform “Dance Yrself Clean” and “All My Friends” on the closing night of Lolla 2016 is one of my favorite memories from Lolla, ever. I didn’t see this entire performance, since I was on the other end of the park checking out a bit of Ellie Goulding (which in my opinion, was highly forgettable), so I’d be interested in checking out what I missed from the rest of LCD’s set. – Kristin 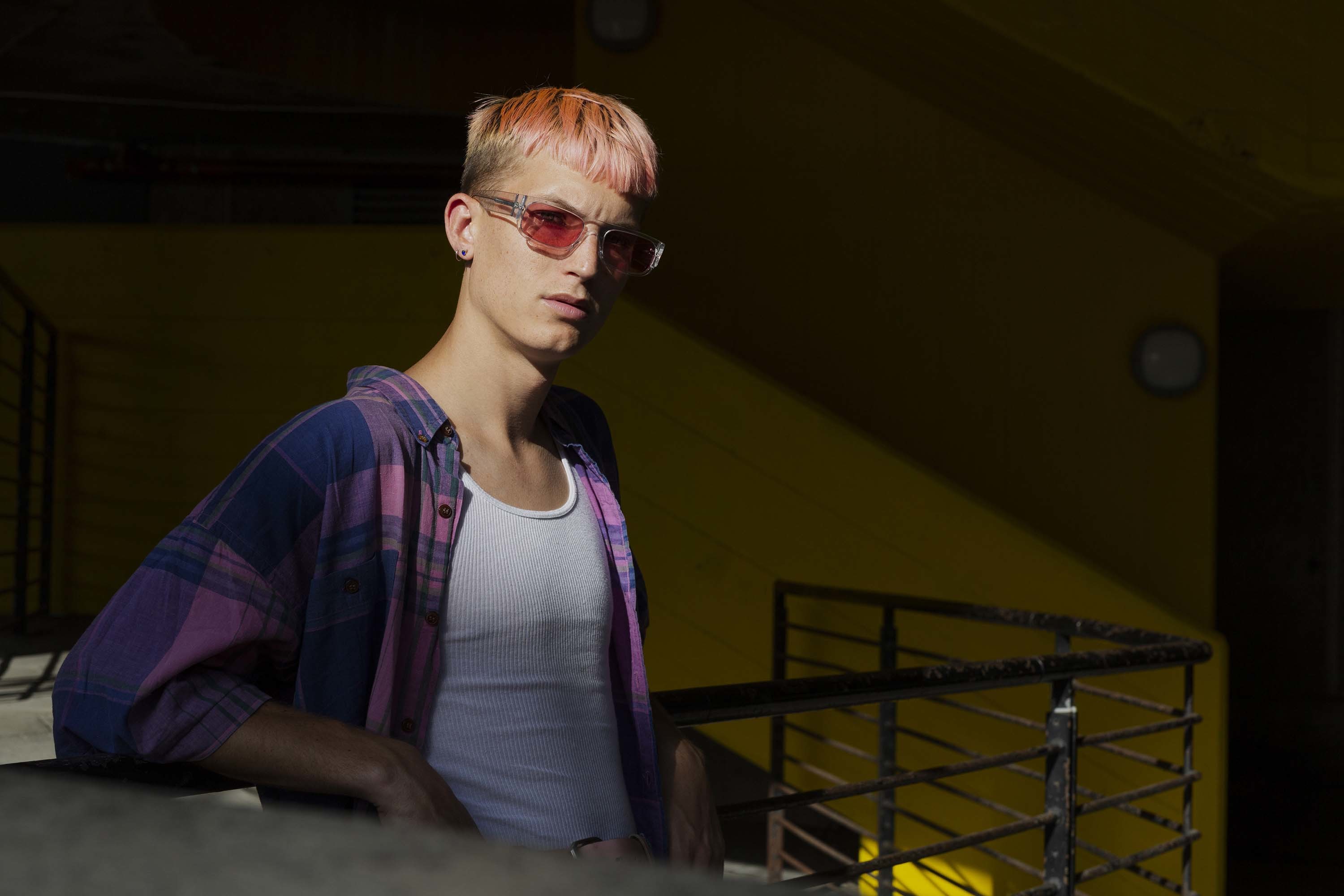 If I could have bet money that any of the artists on this list would have been on the Lollapalooza lineup this year, it would have been on Gus Dapperton. His collaboration with BENEE on “Supalonely” (which is climbing 400 million streams on Spotify as I type), is quickly gaining momentum with a slew of singles released this year and a debut album on the way (out on September 18) would have made him a shoo-in. – Kristin 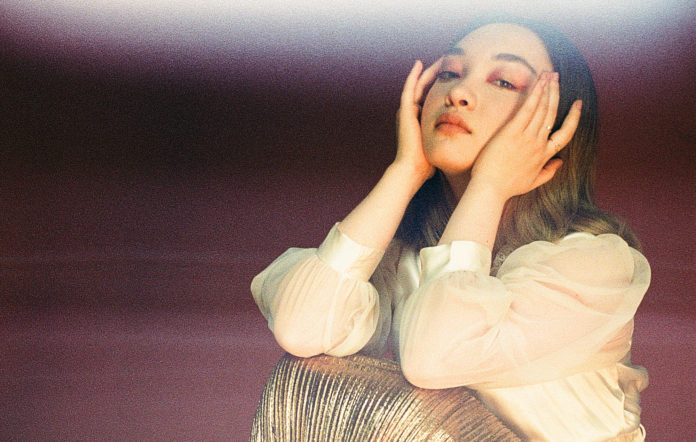 mxmtoon – live performance in the Toyota Music Den at 6:10pm.

If I had to bet money on another artist…it’d be mxmtoon. The 20-year-old singer-songwriter from Oakland, California recorded her debut EP on a laptop in her parent’s bedroom…which has garnered over 100 million streams on Spotify since its 2018 release. I think this is actually a good introduction for mxmtoon to Lolla fans. Her music is very mellow and I think it would translate better this way compared to hearing it during a festival set.  – Kristin

Lupe Fiasco has solidified his legacy as one of the greatest, most dexterous rappers to ever come out of Chicago. Even in recent years, Lupe’s proved he’s still got it: see “Mural” off 2015’s Tetsuo & Youth, inching close to almost 9 full minutes of straight bars. He’s a living legend that has consistently reserved some of his best performances for the concert stages of Chicago, so it only makes sense that Lollapalooza would air his 2008 performance. Longtime hip-hop fans should tune in and enjoy verifiable classics from Lupe like “Kick, Push,” “Daydreamin’,” and “Superstar.” – Mitch 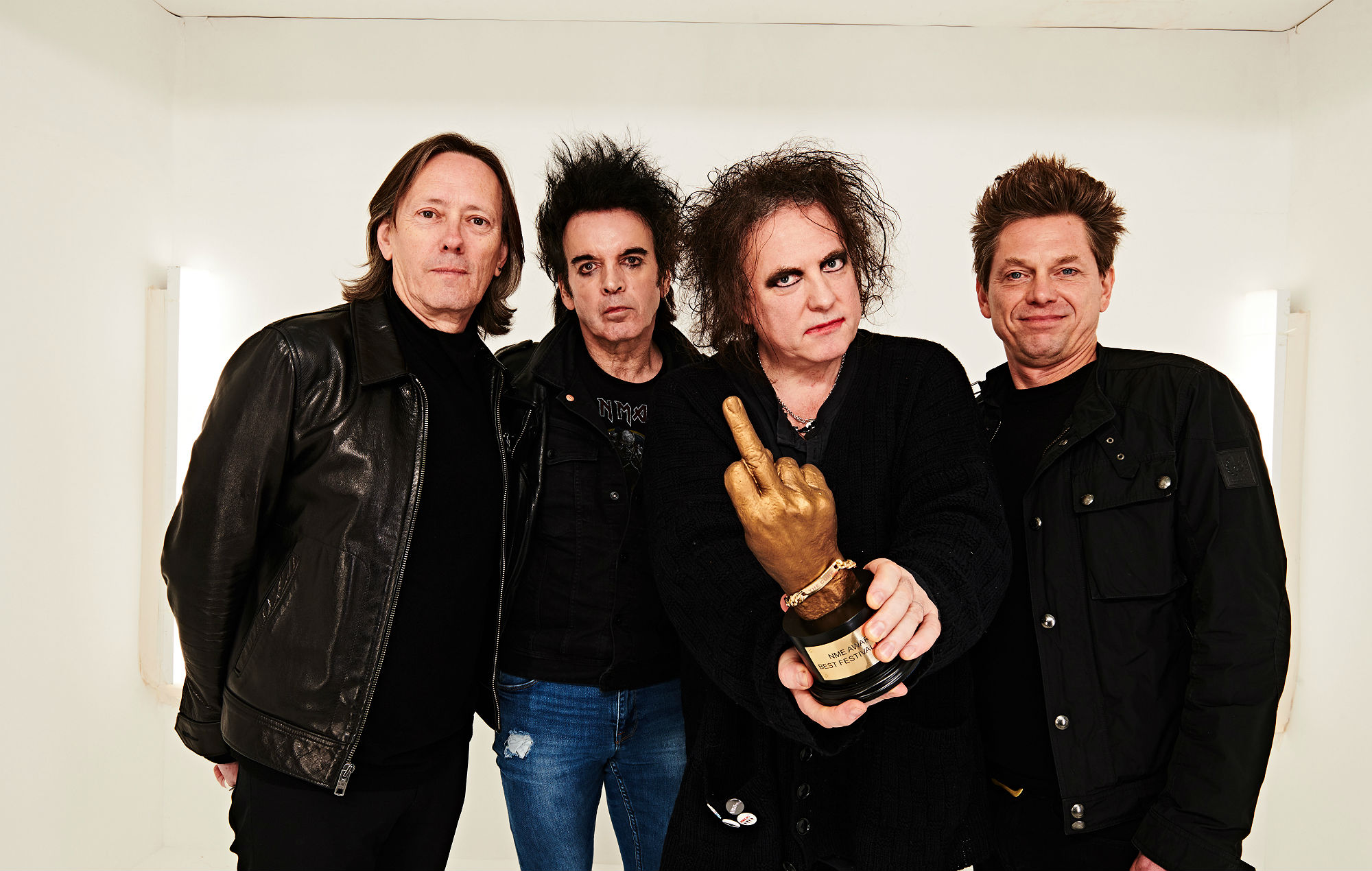 If you get an opportunity to see The Cure perform “Friday I’m In Love” – would you take it? I sure hope so. The Cure’s set at Lollapalooza 2013 was one I had just a few minutes to witness, and in fact, I almost missed them sing this song because I really, really had to go to the bathroom. Luckily I saw it, and would love to see it again (and the rest of their set) this weekend. – Kristin Who else is missing Lorde? Anyone? Everyone? Us, too. Way back in 2014, Lorde made her debut appearance in Grant Park, which eventually ended up being her only full performance after her returning set headlining the fest in 2017 got rained out after only a handful of songs. There’s something special seeing a superstar on the cusp of her fame performing at golden hour in Grant Park…even if the majority of the crowd was (at the time) only sticking around to hear “Royals.” – Kristin Though Wafia did in fact make an appearance at Lollapalooza in 2019 to perform her smash hit “Better Not” with Louis The Child, she has yet to perform her own set at the festival. Thanks to a number of popular singles like “I’m Good” and “Heartburn,” I can imagine she’ll be back and better than ever at Lollapalooza 2021. – Kristin 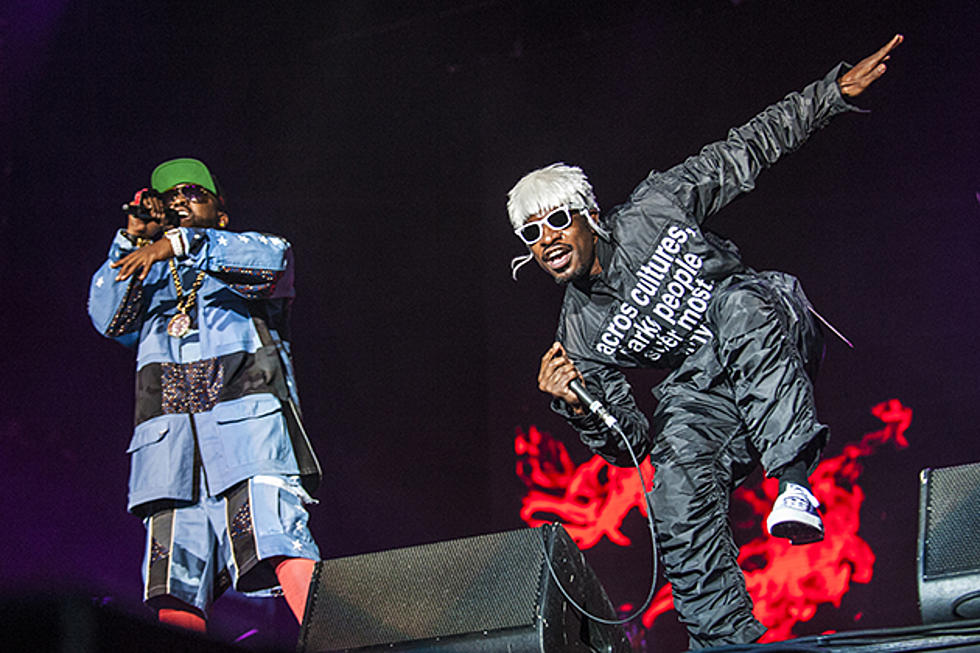 OutKast’s reputation is near-mythical, and for good reason. Comprised of Andre 3000 and Big Boi, two of the greatest lyricists and artists to ever grace a microphone, the duo was instrumental in paving the way for the entire sound of Southern hip-hop to emerge as we know it today. That, and they pushed the very fabric of what it means to be a hip-hop group, effortlessly bending genres and instrumentation in ways that had never been done before. Rarely imitated and never duplicated, be sure to listen to OutKast’s virtual set through to its end, where they might just play “Int’l Player’s Anthem” – one of the greatest hip-hop songs of all times. Don’t @ me on that. – Mitch 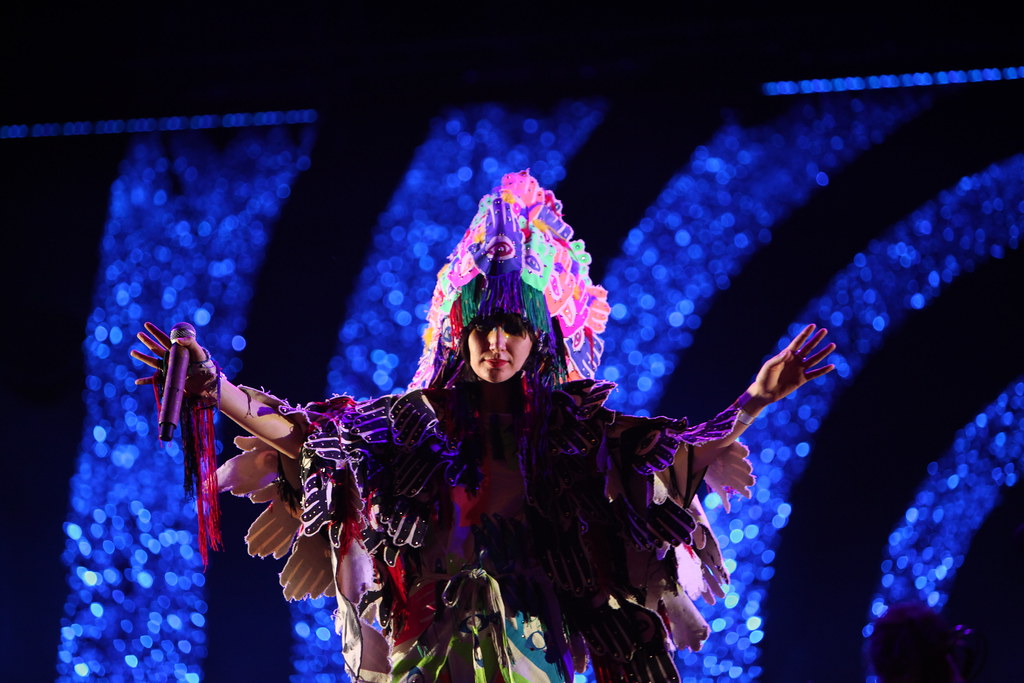 The Yeah Yeah Yeahs are garage-punk indie gods and have given dozens of memorable performances over the years. Need I say more? – Mitch My favorite opening by any band in my history of Lollapalooza is Portugal. The Man’s 2018 performance. Fortunately, that’s the one that will be virtually aired this weekend. Right out of the gate, Portugal. The Man opened with a guitar cover of Metallica and immediately followed it up with Pink Floyd’s “Another Brick in the Wall, Pt. 2.” And if that wasn’t enough, they seamlessly transitioned into one of their biggest songs at the time, “Purple Yellow Red and Blue.” Whether you’re a longtime fan of Portugal. The Man, or just recently heard of them because of their unexpected smash single “Feel It Still,” the band has a tremendous amount of off-the-cuff energy that will make for an enjoyable viewing experience. – Mitch

The Neighbourhood – live performance at 10:40pm.

The first Lolla I attended was during summer 2013 before I headed for college. And the first band I ever saw at Lollapalooza happened to be The Neighbourhood, who I had never heard of but reluctantly went to because my friend Kristin (AKA Chicago Haze’s Editor!) wanted to check them out. While some can successfully argue that The Neighbourhood has lost their luster over the years (I have still enjoyed most of their outputs), this small-crowded performance was really good. If you’re a fan of indie rock, tune into this performance to see what they’re up to in 2020. – Mitch