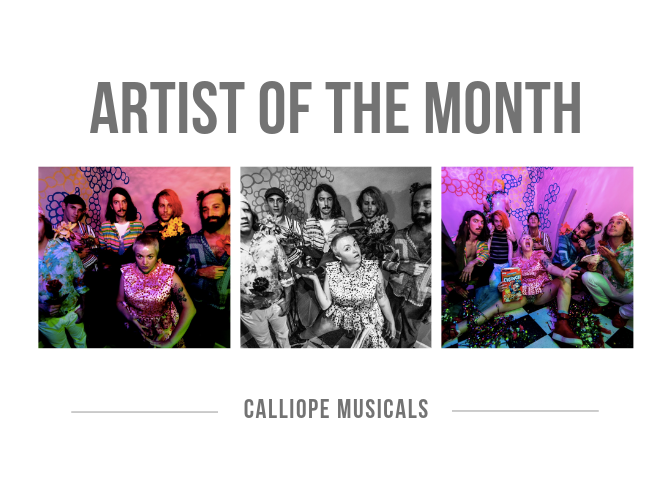 Happy end of July! The time has come to introduce another artist of the month – one that I have been OBSESSED with from the moment I first heard their music.

Why You Should Care: While I definitely love live music – and you know this from reading my blog – not every artist I stumble across can necessarily translate the energy from their recorded music into a live show. There’s only a few artists I’ve ever stumbled across who I just KNOW create magic during a live show – and that’s exactly how I felt when I first heard Calliope Musicals. Whenever I hear a song for the first time and I really LOVE it (or hate it) I can remember vividly where I was the first time I heard it. When I heard “Fear This Body” by Calliope Musicals for the first time, I was walking down the street on an unusually warm spring afternoon and I had to stop and pause the song when I realized it was by an artist I had never heard of. I knew I needed more.

Color/Sweat sounds like nothing else that’s been released this year but is somehow a perfect representation of what I want music to sound like. It’s meaningful, lively, powerful and of course – it makes me want to dance.

Below is my Q&A with Carrie (lead singer) of the group:

Chicago Haze: Your music, and specifically the tracks on Color/Sweat. sound like nothing else that’s being done in music right now. What was the process with creating this album? Was it different than previous releases?

Carrie: We had so much fun making this album, and we took a very “yes, and” approach to making it. If someone had an idea, we fearlessly went in that direction and found a way to make it happen. Our producer, Frenchie Smith, is a huge influence, and his adventurous spirit made it easy to explore. We definitely used production to try and transport listeners to our show and the little planet we create there. Time Owes You Nothing was definitely created to be separate of our live shoes and be a stand alone record, but we had so much fun finding ways to use sound to guide peoples’ imaginations visually.

Chicago Haze: It’s mentioned on your Bandcamp page how this album was politically fueled and was inspired about uneasy feelings after the 2016 presidential election. Do you think that made your music sound any different compared to past releases?

Carrie: This record definitely has a fighter’s spirit and sense of urgency. As a woman and someone who cares so much about human rights of all kinds, it would have been impossible to make a record that didn’t address the war on bodies including but not limited to POC, queer, trans, and non binary folks, poor people, women, and anyone else you might add to this list. Our government is a nightmare, and I believe art has a unique ability to acknowledge that in a way that brings people together and inspires them to keep going.

Chicago Haze: What is your process like with six people in the band? Is everyone involved in that?

Carrie: This record was done mostly with myself, Craig, Josh and Andrew Vizzone (former bass player) at the helm. I do the majority of the song writing (with the exception of “Cosmic Poison Arrow” – shoutout to Craig!!) and then everyone else fills in and brings the songs to a new level. We have a very open door creative process, so everyone is welcome to contribute and create.

Chicago Haze: You are a self proclaimed “psychedelic party folk band” and pride yourself in having very high energy performances. What’s it like trying to play venues full of strangers? Do you get nervous?

Carrie: That description came to be a bit earlier in our career, and I think with this latest record the folk world might renounce us as members. But yes, our performances have a huge focus on the energy and vibe. I get nervous every single time. Sometimes that means I’m grumpy and quiet, other times it means I run to the bathroom and have to throw up before the show, and my favorite times it just means a tasteful amount of butterflies in my belly. But either way the anxiety generally dissipates once we hit the first note and then it’s all fun and games!

Chicago Haze: What’s one takeaway you hope a listener can understand from Color/Sweat?

Carrie: You are tough; you are full of life and purpose; you are enough. You are worthy of an adventurous life. Don’t believe the systems in place to keep you down; you can do anything.

Chicago Haze: The tracks must have their own vibes when performed live. Do you have a favorite to perform?

Carrie: That’s a tough one. It always makes me happy to see people singing along to “Fear This Body,” so that’s an especially fun one. I also love “Color/Sweat” because it’s a moment to go totally insane and kinda lose it completely. Also it has the Jerry Bomb, so it’s hard to compete with that.

Chicago Haze: What’s up next?

Carrie: Fun! Adventure at every turn! Currently recording new music in between tours!

Check out a performance of Calliope Musicals during a SoFar Sounds concert in Chicago from 2017:

Click here to read all of Chicago Haze’s Artist Of The Month posts.

Thanks for reading, as always!
– Kristin