It’s hard to believe that another month has come to an end but here we are! Out of all of the artist of the month features, I’m probably most excited to share this one. That’s no shade towards the other artists I’ve featured, but I’ve been a fan of this one in particular for over a year at this point and being able to feature her more in-depth on the blog is so exciting!

Name: Morgan Gildersleeve (Stage name Morgan Saint)
Age: 24
Hometown: Mattituck, New York
Genre: Dream Pop
For Fans Of: MUNA, Banks, Billie Eilish, Anna Of The North
Why You Should Care: Not many pop stars admit to calling themselves aliens, but Morgan Saint is the exception. Growing up in New York, Saint felt like an outsider, and turned to art as a way to express herself – singing, painting, photography and more. She eventually enrolled in Parsons School of Design for illustration and was so moved by her senior project, it inspired her to write a song about it. A family friend who had heard Saint perform the song at a winery back in 2016 (who also happens to work in the industry), loved her talent and artistry and set a meeting up with a major label. Saint signed with Epic Records (Camila Cabello, Travis Scott, Zara Larrson) after a meeting with L.A. Reid (who was president at the time). The rest is (ongoing) history.

Saint’s debut EP, 17 Hero, was released in October 2017. She has since toured with Goldfrapp, Missio, Lovelytheband, played festivals like Sloss Fest, Forecastle and Lollapalooza.  Alien, Saint’s most recent EP, was released in October 2018 and features some of her most personal and interesting work to date. Since the fall, Saint has released another single, “god bless our souls,” and is currently on tour with fellow Chicago Haze topic of discussion, Léon.

I had the wonderful opportunity to check out Saint’s opening set at the House of Blues in Chicago last night. I had the chance to see Morgan last year at Lollapalooza, but this performance seemed even bigger and more exciting than the first time. The 1400 cap venue was quietly filling up as Morgan took the stage, her energy palpable as she took the first couple verses of her opening track to warm up the crowd. Despite previously seeing her perform on the smallest stage Lollapalooza offers during the weekend (I wouldn’t say the length is more than 15 feet wide), Saint showed no signs of struggle making her way to both ends of the stage to get all sides of the crowd involved in her music. Though it took time for the crowd to actually loosen up – as what usually happens during an opener’s set – the audience seemed to take to Saint’s stage presence and originality quite naturally and with open arms. It wasn’t long until fans were swaying along to the beat of the music. Her songs “Sinner Boy,” “On Fire” and “god bless our souls” seemed to particularly set the tone of the 30-minute performance and also seemed like the ones that Saint felt the most confident performing. While her older tracks like “You” and “Just Friends” are the ones that initially made me a fan, it felt like hearing her most recent releases encapsulated the direction that Saint wants to take her sound without losing the core sound of her music that made her stand out to begin with. There’s a reason she’s on a tour presented by Ones To Watch! 😉 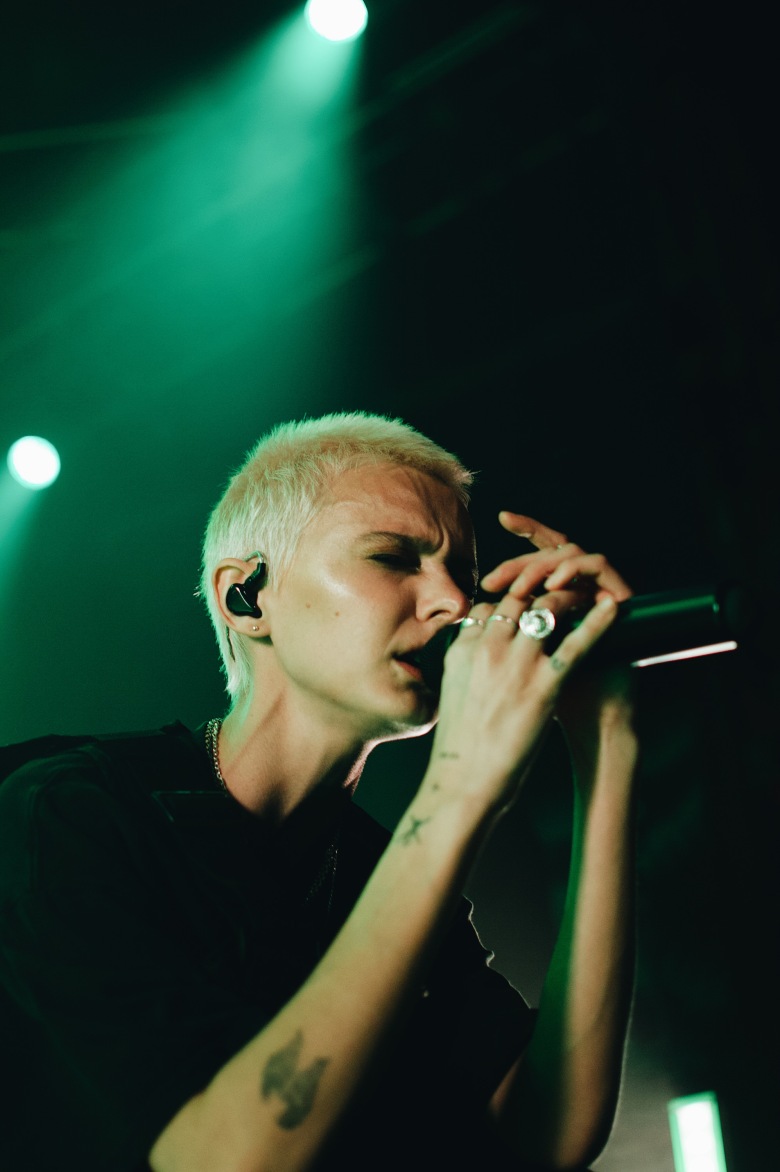 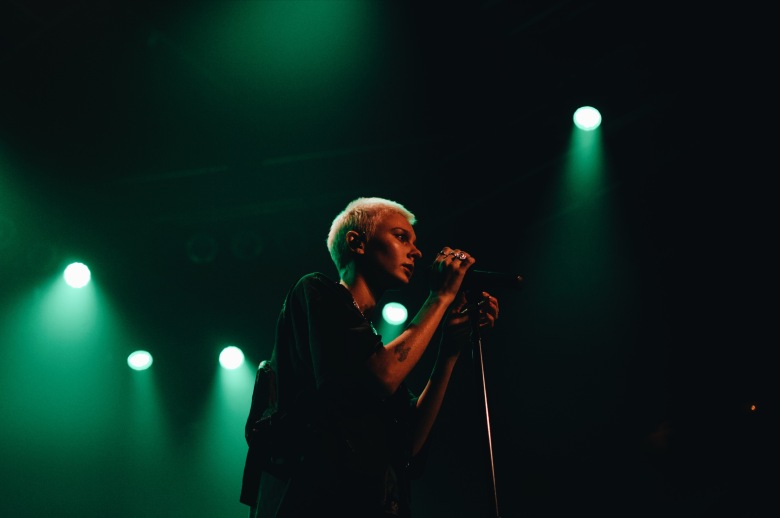 Check out my Q&A with Morgan below.

Chicago Haze: How and when did you first become inspired to write and create music?

Morgan: I feel like I came out of my mom singing! But when I started taking piano lessons when I was about eight years old, I remember it all sort of falling into place in my mind that I could sing and play this instrument. It felt so exciting to me.

Chicago Haze: What is it like to find success as a musician in the digital age?

Morgan: I think “success” is completely misrepresented in our society right now. People count likes and followers on Instagram as a means of quantifying success. I think that’s insane, and is a very disheartening climate to exists in as an artist. To me, success is making exactly what I want, how I want it without compromise. I feel my most successful when I am personally evolving and pushing boundaries with what I am making.

Chicago Haze: Who are your musical influences, past and present? Who inspires you?

Morgan: That’s a good question. I think that being inspired and influenced are two totally different things in my mind. I listen to music for so many different reasons, and to different songs/artist to fulfill different aspects of my life and changing mood. There are definitely aspects of different songs that inevitably come together in a unique way in my brain and subconsciously influences what I make, but I try not to let any one artist influence me. I strive to make something that’s its own. With that being said, I am VERY inspired by so many people. There are way too many artist that I am inspired by, that it seems excessive to even start listing!

Chicago Haze: I am obsessed with your cover of Cardi B.’s “Thru Your Phone.” How did you come across deciding to record a cover of that song and what does it mean to you?

Morgan: Haha thank you. I really loved the pre chorus and chorus of that song when I heard it, and I couldn’t stop singing it for a week straight. I hadn’t released any new music in a while at that point, and wasn’t quite ready to release anything that I was making of my own just yet, so I had a very spur of the moment idea to try to cover the song. I made it in a day! I think I just like an extreme challenge, and although the chorus felt perfectly in my comfort zone, the verses were 1000% NOT, and I was just curious if I could try to pull it off and make it my own. It’s not a cover that feels incredibly personal or serious to me, but it was fun to make. I sort of think it’s funny that it even exists in the world.

Chicago Haze: “New Regime” speaks on themes of feeling alone and isolated (it’s probably my favorite song of yours). This seems to be a theme that lots of young people deal with in 2019. What inspired you to write this song and how has it been being able to perform it live?

Morgan: I wrote that song a long time ago! I feel a bit disconnected to it at this point, only because I have grown and changed so much as a person and have evolved sonically so much since writing and producing it. At the time, I remember feeling misunderstood and very alone— and believe me, I still feel that way sometimes…but I think since then, I’ve become so much more comfortable in my own self, and feel way less of a desire for others to completely “understand” me.

My view of myself has changed in a very positive way, and with that, my view of others has changed in a great way as well. I no longer seek validation from anyone, and instead find it exciting when someone can’t quite wrap their head around me— It feels like an opportunity to expend someone’s thinking.  I played it live on my last run of shows, but I’ve decided to leave it out for this run in order to leave room for other songs that feel more honest to me personally at this moment in my life!

Chicago Haze: What are you hoping to achieve in the next year of your career? Anything specific you are looking forward to?

Morgan: I really hope to just make more music that I believe/ believe in, and to connect with as many people as possible. I hope to tour a lot too! And maybe design a car, or some shoes, or jewelry, or even a house!

All photos shot by Nic Kosirog-Jones shot for Chicago Haze.

Click here to read all of my Artist Of The Month features.