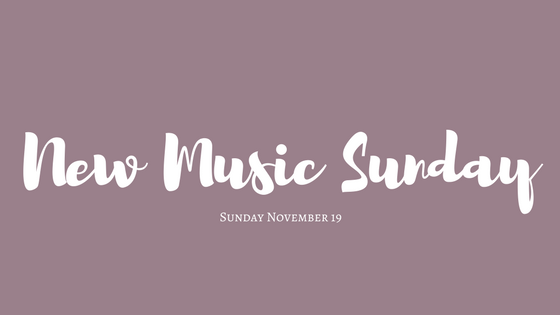 Hi guys! I’ve decided to do a weekly blog post every Sunday with a bit of a round-up with some of my favorite songs that I’ve heard during the week. I think that Sunday suits best because so much new music comes out on Fridays – and writing about it the same day it comes out doesn’t really give me time to soak up the music and digest it. I’m not really going to limit this post to a certain number of songs – weeks can be SUPER hit or miss in terms of whether or not I’m feeling music that was released that week. Here we go!

In order of release date:

Sigrid has been on my radar for awhile and her newest release, “Strangers,” is definitely my favorite song she’s done thus far. I’m digging the very refined indie pop sound coming from such a young performer (she’s 20!) and I think this is the first step in the direction of a more mature sounding aesthetic from the Norwegian pop-star.

I’m kicking myself for not hearing of Brandi Carlile sooner. I recently have been gravitating towards folk music more and more and I think Carlile does this is the most beautiful and authentic way. Listen to her soon: she’s playing the Chicago Theater in June!

Australian dream pop performer Hatchie has released two songs in 2017 – and both are on their way to becoming monsters on the streaming charts. Her first single “Try” is climbing towards 800,000 plays on Spotify and her newest release, “Sure,” was featured on the “New Music Friday” playlist on Spotify and is getting a lot of buzz.

I think I’ve included a track of theirs before on a blog post and definitely in a playlist. A lot of this song really reminds me of a Lorde track and I think that’s why I’m so drawn to it. Side note: Their band name is “Airplane Man” but this song specifically is not listed under that name on Spotify – it’s under “Jay2” – super confusing but it is their song.

Pitchfork wrote that Charlotte Day Wilson “Will launch you into a stratosphere of emotion” and I have to say that I agree. The self-released artist has performed in groups before deciding to release solo music and has recently collaborated with BADBADNOTGOOD. I am super intrigued by her R&B pop sound that is influenced by current pop trends in music without giving away too much of her unique style.

I definitely was never too into Dashboard Confessional when they were at their peak in regards to popularity, but I have listened to them here and there over the last few years and really love their stuff. I had no idea that they were even going to be releasing new music but I love that this song sounds like their classic catalog without sounding too outdated. I would be curious to see if it lands on the radio at all.

First off, I couldn’t find the version of the song recorded for Spotify but the version they performed at WKQX in Chicago is pretty faithful to that version. This is one of my favorite songs of 2017 and hearing it stripped down is a totally different sensation. Wolf Alice has crafted one of my top albums of the year and hearing this song in a new way was really beautiful and fascinating and I’ve taken away different ideas from this version compared to the recorded version on the album.

Do you guys have those bands that you always want to listen to and then just forget about it? That’s how I am with Tame Impala! I’ve heard their albums a couple times but never got too into them. I heard this song this week without realizing who it was and I have to say I’m really loving this song – and I love a good song title like this.

Random, but the very first few seconds of this song reminds me so much of Boys Like Girls. Listen to it and let me know. I have been more and more interested in exploring EDM music and I’ve particularly been drawn to San Holo’s music. According to some Googling, his style of EDM is “future bass” – a subgenre that I learned also applies to Mura Masa, Flume and Cashmere Cat – which are other DJs that I have enjoyed in the past.

If The 1975 and Lorde had a love child, I think this is what it would sound like. I can hear either of those artists record and release this song, which is a cool thing to hear from a band after just a couple songs (I’ve been a fan of their releases in the past).

I hope you enjoyed reading about a handful of new songs I’ve been loving this week! I hope to continue this series and will plan to release a new post on my favorite songs from the week every Sunday.