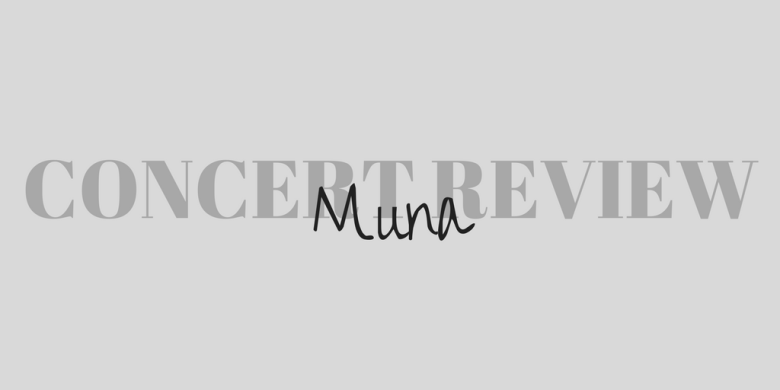 If you haven’t heard of MUNA before, you’re probably living under a rock. The trio of women are currently touring their debut album, About U, which was released a little over two weeks ago on February 3 and are on their way to changing the face of pop music.

After performing a handful of shows and festivals here and there last year to showcase their release, The Loudspeaker EP, the band was gearing up to release their full length, 12 track album packed will synth pop anthems and political lyrics that has been received spectacularly by fans and critics alike.

If you haven’t read any of my pieces spotlighting MUNA before this one (search “Muna” in the search bar to the right to see them), you must know and understand MUNA’s history as a band. The three women, Katie, Naomi and Josette – met in college at California and joined forces to create a world in their music in which their fans could escape from the hardships and prejudice that they may face in their daily lives. All three women identify as queer – a concept that, 10 years ago, may have been too controversial to be comfortable with in a world as superficial and image obsessed as the music industry.

As a band whose identity is inherently political (the three women all wore F*** Trump shirts during their Lollapalooza performance last summer) and continue to gain respect and support for their constant activism through social media, their 80s synth pop sound continues to make waves for singing about generally sad topics by creating upbeat tempos and inspiring lyrics, which was evident at their performance at The Subterranean in Chicago last weekend.

“It’s really weird to be here, we came here for my 21st birthday. It’s weird to see people I grew up with in the audience,” Katie announced to the enthusiastic (not to mention completely sold out) show in Chicago’s Wicker Park neighborhood. Katie grew up in the Chicago suburbs and mentioned the many times she had visited the venue to see performances from all sorts of artists during her teenage years.

“This may sound obnoxious cause this is our show, but I have never seen this place like this before,” she continued, referencing the extremely cheerful, engaging, not to mention diverse audience who cheered her on as she finished her sentence. I had honestly never been to a female band’s live performance with so many males in the crowd.

If MUNA’s goal was to create a safe space for their fans through their music, they had been doing a good job so far. Just a week or so ago, the band performed their single “I Know a Place,” on Jimmy Kimmel, a song that was dedicated to the victims of the Orlando nightclub shooting last year.

The following is an excerpt from this Time Magazine article discussing the meaning behind the song with Katie Gavin:

“With “I Know a Place,” we chose to imagine a place where none of us would need to be afraid. In honor of Pride and the rich LGBTQ history of turning bars and ballrooms into safe havens, the space we imagined was a dance club…at the time, we intended the dance club to serve as a metaphor. Then, on June 12th, 2016, a gunman walked into Latin Night at Pulse Nightclub in Orlando, Florida — a queer space, a brown space, a safe space — and shot 49 people to death…”

“Today, in this post-Trump America, many of us feel badly bruised. We, as a band, understand this. We believe it is a mistake to see this incoming Administration as anything other than a threat to the livelihood of our brothers and sisters; the LGBTQ+ community, the Muslim ummah, women, POC’s, indigenous Americans, undocumented people, the working class, and beyond. At the same time, we believe it is a mistake to say that a man whose best assets are hate and fear truly represents America. We say this because America has always been an idea, a utopian concept of a multiethnic, multicultural democratic republic, and therefore its home lies in the imagination, not in the House or the Senate or in a Trump Tower.”

With such a message behind the song, I was excited to see their performance on the Kimmel. Instead of the normal bridge of the song, the lyrics were changed. Watch below (or fast forward to about 3 minutes to see the lyrics):

With such an empowering message to millions of people and arguably MUNA’s entire fanbase, I was happy to see that they also included this new bridge in their live performance during the song, which was the first song of the night. As I was prepared for them to include it, it was amazing to see the audience’s reaction to the lyric change and I have never felt such a feeling of inclusiveness, acceptance and warmth in a venue who were feeling such a strong sense of urgency and worry while simultaneously feeling like everything might (eventually) be okay.

The performance continued with MUNA performing every single song off of their debut album. Some highlights (personally) included performing the last song on the track, “Outro” just about halfway through the set, “Around U,” which may be one of my favorite songs on the album, a performance of a brand new, unreleased song (which gave me SO MANY Stevie Nicks vibes), and my favorite song by the band, “Crying On The Bathroom Floor,” which is an ode to abusive relationships.

“I’m crying on the bathroom floor / tearing up the dress I wore, I wonder / If I could ever ask for more / Cause I’m never gonna ask for more from a lover.”

I was floored with the amount of people who knew the words to all of the songs, even though About U had only been released for 15 days prior to the Chicago show. Songs like “Everything,” (definitely the band’s saddest song), and “Loudspeaker” were crowd favorites. “Loudspeaker,” the band’s most popular song, was the perfect closer to the night, the audience of 400 finding the energy to jump up and down during the bridge of the song, easily shaking the floor.

While it is truly difficult for me to review a performance without bias by a musician that I adore as much as MUNA, I can state with 100% confidence that I had 0 complaints about the quality of the performance, the dialogue between the band and the audience, and the overall energy during the set. Being involved this early into the band’s career is something that I am really happy to be a part of. I have seen the band three times since July and seeing their fanbase grow and grow is something so deserving and needed for our society right now.

Timing is everything and I know for a fact that this was their time to not only shake up the music industry, but deliver positive messages to a society that so desperately needs someone to look up to.